Beckman Coulter Life Sciences is taking actions in the best interests of our associates, customers, and business partners as we navigate the growing threats of the 2019 Novel Coronavirus disease (COVID-19). Learn more

Historically, vaccine production has accounted for a large portion of aseptic production. Recent years have seen increased focus on new biologic therapies, most of which are administered via injection or IV. Major pharmaceutical companies are investing to drive the development and release of these new biologics. Since most of these will be produced with aseptic processing, consider the following trends:

Components for many biologic therapies come from cell line production activities. Gene therapies are developed and produced with specific cell lines requiring aseptic processing. Vaccine production continues to increase in the developing markets, and through new vaccine-based therapies, such as new cancer prevention treatments (e.g. HPV). New biologic therapies have arrived, or are in the approval process, for cardiovascular, musculoskeletal, gastrointestinal, central nervous system, hematological, respiratory, oncological, immune system, inflammation, and urological conditions. The approval rate for biologics is much higher than for new small molecule treatments. Due to the profitability of these new biologic therapies, investment is also increasing in biosimilars. All of these factors point to an increasing need for aseptic processing into the foreseeable future. Many of these aseptic processing facilities will need custom handling and packaging equipment, along with an increased use of automation.

Aseptic Processing Improvements and the Need for Event Detection

From Akers’ and Allacogo’s article, “Clean Rooms, RABS and Isolators: Validation and Monitoring in the Diverse World of Aseptic Processing” These aseptic technology improvements have begun to appear in regulatory guidance, such as the EU GMP requirement, starting in 2011, to extend continuous Grade A air flows over stoppered, but uncapped, containers.

“Increasing monitoring intensity (i.e. viable EM [environmental monitoring]) in nearly all instances is only going to result in more zeroes, a phenomenon we’ve seen over and over again. Too often the most common intervention in aseptic processing is environmental monitoring, which is completely illogical. What this means is that the method erroneously relied upon to measure risk is itself the greatest source of human contamination risk!” 3

Due to isolation and improved laminar airflows, the focus of contamination monitoring has now moved from daily processing activities to uncommon events during processing, such as momentary disruptions of the environment or equipment, human interventions, failure to follow SOPs, etc. Event detection requires continuous sampling and non-zero results during events. To limit the exposure of sterile products to events, real-time event alarms are important. Everything is getting cleaner; the risks are now more random and less consistent.

The Role of Non-Viable Particle Monitoring

In daily operation of modern aseptic environments most particles produced are sterile foreign material. These submicron particles are not detected by viable particle EM methods. Viable samples from operations typically produce a series of zero counts (CFU’s) and these samples only “spot check” aseptic conditions due to their infrequent (non-continuous) nature. Although this viable sampling is a recommendation of regulators, it provides no immediate information to capture environmental events.

Continuous non-viable particle monitoring (NVP), when properly configured, provides useful information on changes in the aseptic environment with minute-by-minute updates of count populations and trends, which catch contamination events and thereby identify and quantify risks (i.e. a non-zero result). If root cause investigations for these non-viable particle events identify human involvement in the event, biological contamination may be a possibility. If the event was caused by automated equipment or components, non-biological foreign material contamination may be a possibility. Therefore, assurance of minimum risk starts with continuous non-viable particle monitoring. Although viable particle EM is essential, particularly to qualify aseptic environments, it is a less reliable indicator of risk during sterile product processing, and it does not identify the risk of non-biological foreign matter contamination.

Foreign matter testing in liquid sterile products (via USP 788 testing of injectables) tests a small number of final products (product is consumed during testing). This is essential to qualify the process for large particle contamination from the process and packaging, but it is unlikely to catch foreign matter affecting a small number of products at risk during an event in a large batch. It is the combination of all test methods: viable, non-viable and USP, which creates an umbrella of protection during the production of sterile products. Each test method adds a layer of protection, but it is the unique role of non-viable air sampling to detect real-time changes and events that may compromise portions of aseptic lots.

“Where advanced aseptic technologies are used we should be relying almost exclusively on evaluation of physical parameters, and electronic particulate monitoring, which produce data that can be reviewed in real time rather than requiring several days of incubation.”3 Akers and Allacogo

“We believe that in advanced aseptic systems electronic total particulate analysis is largely sufficient to provide the information required to ensure the maintenance of a validated state of environmental control. If a microbiological sampling component is retained by regulators it should operate at a much lower sampling intensity than that currently expected in manned clean rooms.”3 Akers and Allacogo

“The Grade A zone should be monitored at such a frequency and with suitable sample size that all interventions, transient events and any system deterioration would be captured and alarms triggered if alert limits are exceeded.” 2009 EU Annex 11. This statement creates a requirement for continuous monitoring and alarms.

NVP monitoring systems update once per minute to quickly capture and alarm on particle events. Both the 0.5 and 5.0 micron size ranges are monitored every minute, and count results are provided for a cubic foot air volume, which is collected over the last minute, and a cubic meter air volume, collected over the last 36 minutes. The cubic foot volume is useful for event detection; the cubic meter volume is a comparable reference to the ISO cleanroom standard (ISO 14644) and EU non-viable count limits.

Much has been written about how 5.0 micron and larger particles can be a food source for bacteria and how most bacteria are detected in this size range. However, particles 5.0 micron and larger are much less mobile in air than the smaller 0.5 micron particles. The 5.0 micron particles are therefore much more difficult to detect. It should be understood that airborne particle counters all need the particle to pass through the instrument to be detected and therefore particle ”suspension” and “transport” are important. In modern isolators and RABS, 5.0 micron particles are rare, even during events. The regulatory limit (EU Annex 11) for 5.0 micron in Grade A is 20 particles per cubic meter, which is less than one particle per minute in real-time NVP monitoring systems (e.g. 36 one-minute samples = one cubic meter of air).

A count alarm limit set at one count for a single sample is not statistically significant but due to the EU limit, many systems are set for Action alarms on one 5.0 micron particle. Ironically, some viable particle limits will accept one CFU per sample. A more meaningful Action alarm limit for NVP would be to alarm on three consecutive one-minute samples of one particle at 5.0 micron. This indicates a particle generation source that is significant. Any investigation of root cause should pay special attention to whether the event involved a human intervention. Also of note is that mechanical failures due to friction, such as a bad bearing on an automated robot, tend to generate large particles.

Usually, particle generation sources tend to create more small particles than large ones, and small particles are easier to collect and transport in an airstream. Thus a particle generation event is more likely to be detected at smaller sizes. A particle event that shows 0.5 particles, but does not register 5.0 micron particle counts, may still produce particles of a larger size. The larger particles may not be counted because there are less of them and they do not travel as well in the air sample. Thus, more attention should be paid to the smaller 0.5 micron particles in NVP monitoring.

A common misconception is that Action alarm limits for 0.5 micron can also be set at the Grade A limit, which is 3520 particles per cubic meter. This translates to an Action limit of 98 particles per minute (i.e 1 cubic foot sample). This particle level is well above the average particle level for modern aseptic processing environments that are in operation (i.e. not “at rest”), which can average somewhere between zero and 10 particles per minute of the 0.5 micron size. If an aseptic process is averaging 5 particles per minute at a given sample location, a sample that jumps to 90 particles is an 18 times increase – but it may not trip an Action alarm. Such a large increase indicates a particle generation event; an event that may have also generated larger particles that may not have been detected.

The best practice for setting 0.5 micron NVP count alarm levels is to use the same practices we used for setting viable count limits in older environments containing humans:

In conclusion, use these two principles to detect potential NVP contamination events during aseptic processing (i.e. “in operation” alarm limits):

Figure 4. Permanent installation of online particle counter for continuous sampling during filling. Sensor is installed outside of Grade A/B – inside the filling equipment 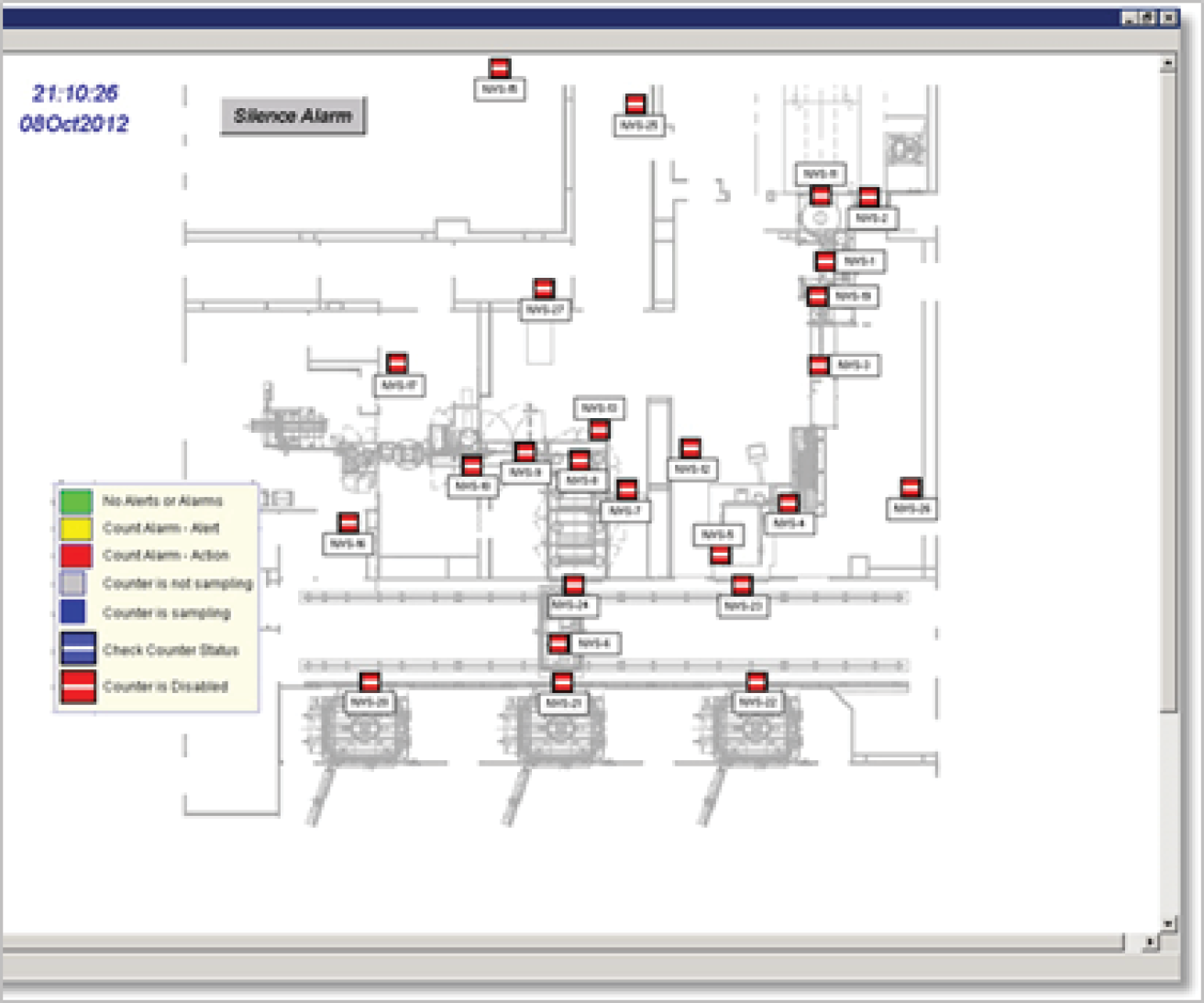 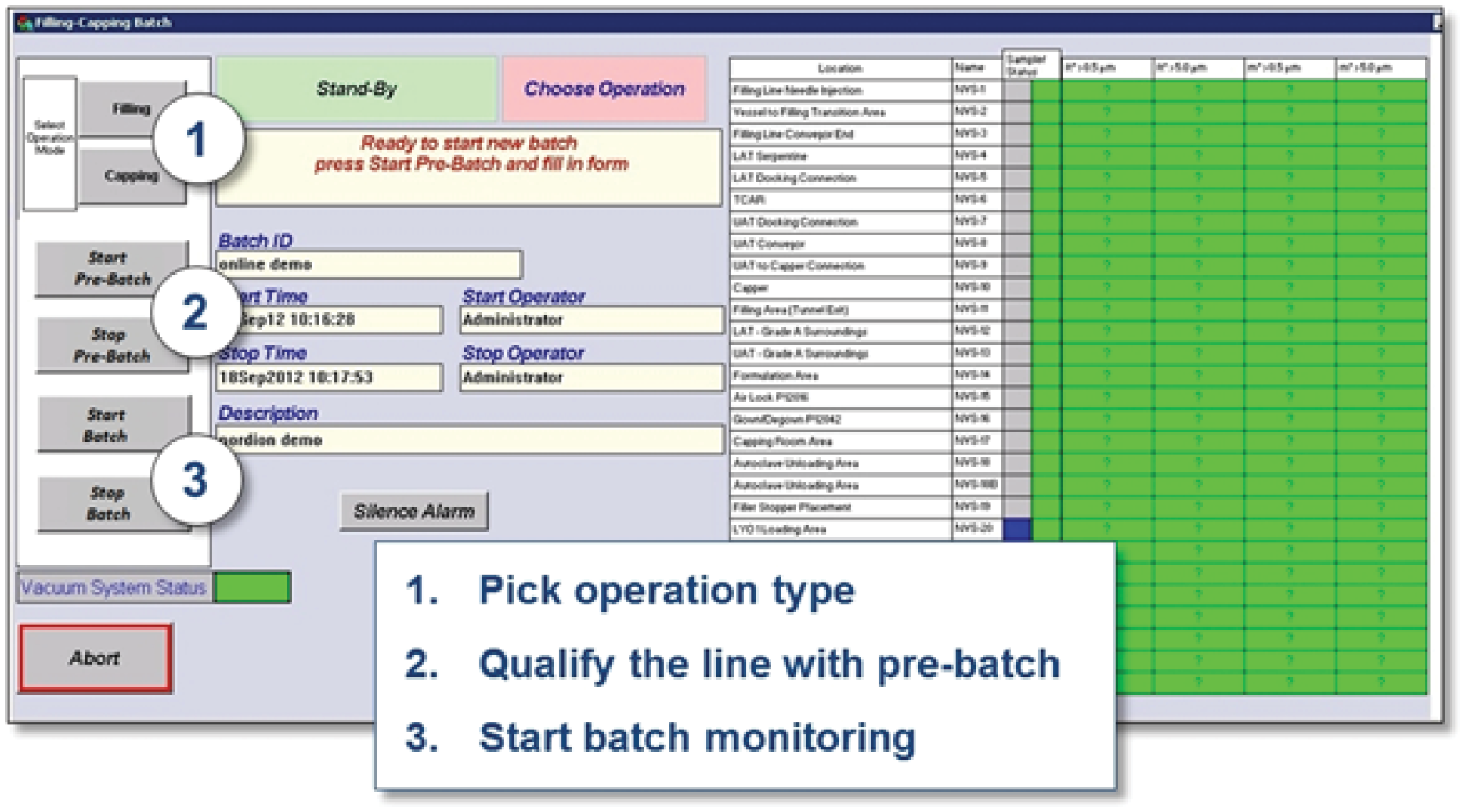